* In case of any delay in receiving the OTP, you may verify it later. Please proceed without verification.

Enter your City name or Pincode 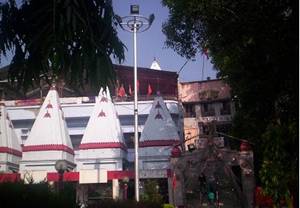 Jammu and Kashmir - Lands of Devine natural beauty. Bounteous mountains, hills, flowing Jhelum, Dal Lake, vast grassland, towering chinar trees and far flung apple gardens will undoubtedly mesmerize you. It was aptly quoted by the famous emperor Shahjahan that if there is any heaven on earth, it is here, it is here, it is here. Not only for its natural beauty, but when it comes to Hindu pilgrimage, Jammu & Kashmir holds a paramount position. This is where the shrines of Vaishno Devi, Chichi Mata, Sukrala Mata, and Amarnath are located.

Chichi Mata Temple is a salient religious site located near the Samba town of J&K. Every pilgrim passing through the Samba town on their way to visit Vaishno Devi Temple piously bends his head at the Chichi Mata shrine. As this is the first temple falling in the route to reach Vaishno Devi temple, it is called 'Pehla Darshsan' or 'first blessing'.

The Chichi Mata Temple has an interesting history. In keeping with Hindu mythology, it was believed that Goddess Durga is the reincarnation of Goddess Sati. Goddess Sati left her life after jumping into the ceremonial fire organized by her father Yaksh to take vengeance as her father insulted Lord Shiva, her husband. Lord Shiva, after knowing about Sati's death, took her lifeless body and roamed around insanely. To restore him to sanity, Lord Vishnu cut Sati's body in 52 pieces with Sudarshan Chakra which fell on earth at various places. It is said that Chichi Mata temple is erected on the location where Goddess Sati's smallest finger fell down. This emphasizes the importance of the temple and how rightly it is termed as the gateway to Vaishno Devi. 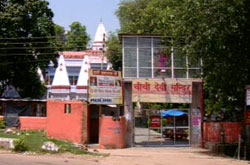 The calm and pure atmosphere of Chichi Mata Temple will awaken your spiritual self. Like the other Hindu temples Chichi Mata temple also has towers. The main tower is at the centre of the temple premise and it is surrounded by other smaller towers. There are Lord Shiva idols along with Chichi Mata who is considered as manifestation of Goddess Durga. The temple is painted white from outside. 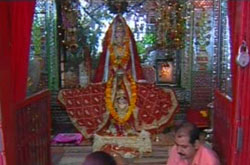 Priests perform pooja to Chichi Mata every day. All rituals and traditions are followed religiously. Mata Temple attracts pilgrims and local devotees who offer prayers to their deity. Tourists come from all over the country and even from abroad throughout the year. Every year during Navratra, flag hoisting ceremony takes place where the management committee of Pujya Chichi Devi Mandir Samba hoists flag at devsthan.

How to Reach Chichi Mata Temple

Chichi Mata temple is situated on the National Highway and about 2 kms from the Samba town. You can reach Jammu first. Samba is almost 29 kilometres from Jammu airport and 33 kilometres from the city. It takes around an hour’s time to get there by road.

Chichi Mata Temple is a popular religious place that attracts numerous people. Locals have tremendous belief on the godly powers of the shrine. It is one of the many well known temples in Jammu and it enriches Jammu and Kashmir Tourism. Away from day to day chores of life you will relish the tour and each day spent in Jammu and Kashmir will be a lifetime memory. This temple is a must-visit on your way to Vaishno Devi Temple.